It’s no secret that Americans love to eat large amounts of food. According to the National Institutes of Health, portion sizes served by restaurants over the past 20 years have doubled, and in some cases tripled. This portion distortion affects our understanding of exactly what a healthy portion looks, feels, and tastes like, and we bring this confusion from the restaurant into our homes. Attempts at public health measures meant to place limits on epic large portions have been relatively unsuccessful, thanks to pressure from the food industry (see: New York City’s failed soda cap.)

So, why are portion sizes such a big deal, anyways? Can’t we just simply stop eating when we get full? Oh, if only human psychology and anatomy were that simple! It turns out that hunger and satiety are highly complex mechanisms caught between both the body and mind. Consider the following research, where participants were asked to eat soup. One group of participants ate soup from a regular bowl sized, and were asked to enjoy as much soup as they wanted. The second group ate from the same size bowl that was rigged to slowly and imperceptibly refill while the participants were eating, via tubing under the table. Those in the second group ate a 73% more food. Let me say that again — the second group, when offered essentially an unlimited supply of soup — ate almost THREE QUARTERS more food. Clearly, the sensation of satiety is linked to not only our stomach, but also our eyes.

But wait, there’s more. Let’s not forget research from the journal Appetite which found that people finish their plates an astonishing 91% of the time, independent of how much food is offered, even if they report that they are not hungry before they begin eating. A study from the Journal of the American Medical Association found that eating from large bowls encouraged participants to consume an extra 54% when compared to those eating from small bowls. According to research from the Academy of Nutrition and Dietetics, when presented with a 12-inch deli sandwich instead of an 8-inch, women ate 12% more calories and men ate 23% more calories. Even though these participants ate significantly more than other participants offered 6- and 8-inch sandwiches, they reported feeling the same amount of satiety. This research demonstrates that visual cues play a large role in the amount of food ultimately we consume. Considering that much of our food environment in the US is now designed with these enormous portion sizes in mind, it’s not hard to see how excessive portions are contributing to the current — and very costly — worsening of American’s health.

In short, our eyes cannot be trusted to feed us properly. Under the right conditions, the stomach is more trustworthy; our stomachs requires about 10-15 minutes to relay a message to your brain stating whether you are actually satisfied or not. Eating slowly and taking a little break in between helpings can give a better gauge on our actual satiety via the stomach. Ultimately, however, beware the proverbial eyes that are bigger than the stomach.

When at home, the solution to eating appropriate portion sizes is simple, and doesn’t require measuring or memorizing a single thing. Look no further than the size of your dinner plate. The average American plate is a whopping 12 inches in diameter. Place a healthy portion size of any food in the world on this plate and it’ll look like you’re starving yourself. Instead, the secret is downsizing to a 9-inch plate. Even if you don’t take the time to learn what proper portions are for each food and measure them out before eating (which, as a Registered Dietitian Nutritionist, I honestly rarely do), eating off of a 9-inch plate will help you steer the right course by default. In fact, it’s estimated that using a 9-inch plate can help reduce our caloric intake by 30-35% — a world of difference.

When chowing down on your new 9-inch miracle, use common sense by not stacking the plate excessively full with food. If you want seconds, get them! Just give offer your body and mind a 10-15 minute break in between firsts and seconds, to make sure that your stomach is really feeling those seconds as much as your eyes are.

Finally, just a reminder to eat until you are satisfied, not full or stuffed. Happy eating! 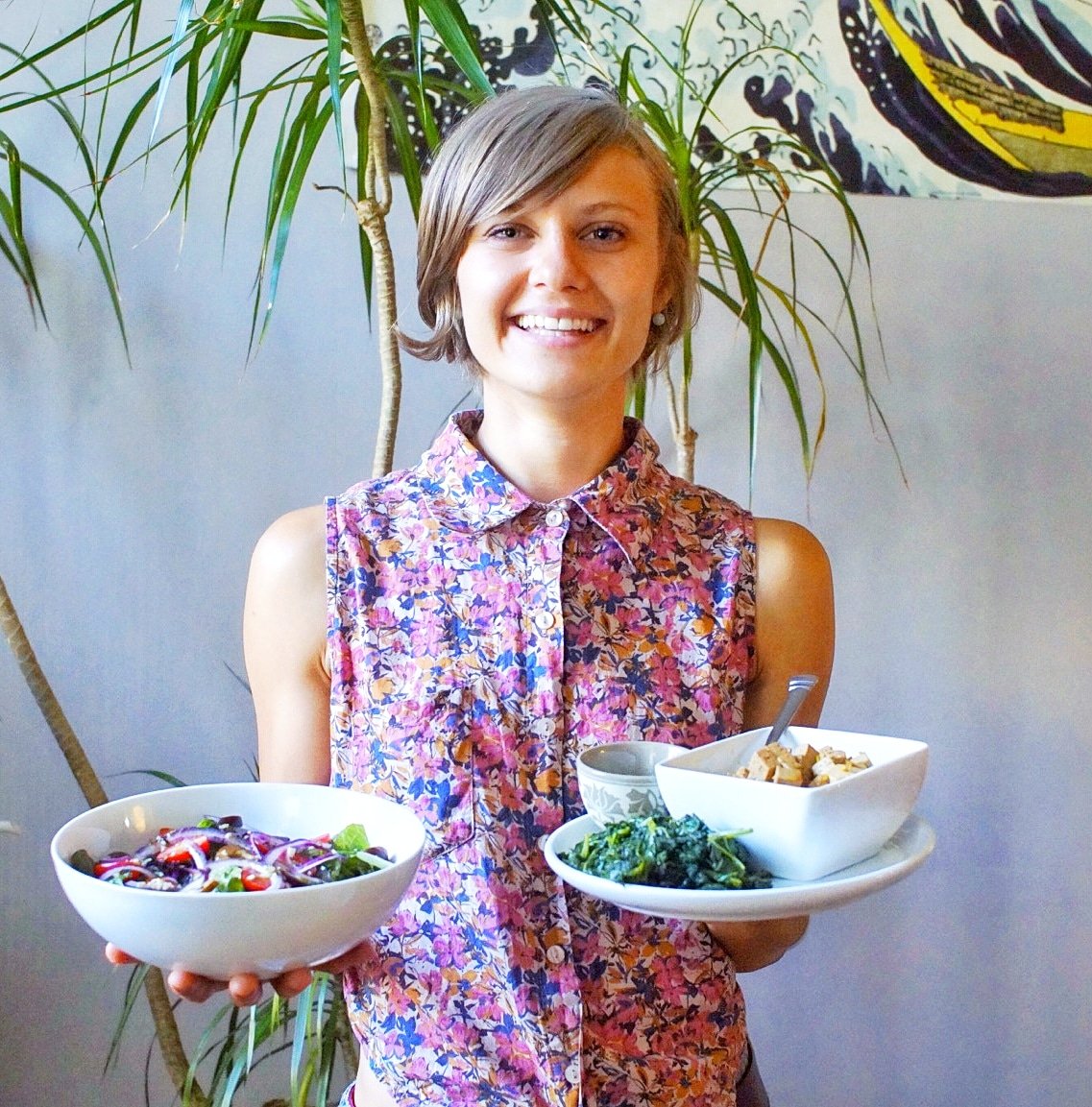 Hi there, I’m Caylee!
I want to help you heal with food!

As a dietitian-nutritionist, using food as medicine is my passion, forte, and training.